Stargazing in the Southern Hemisphere 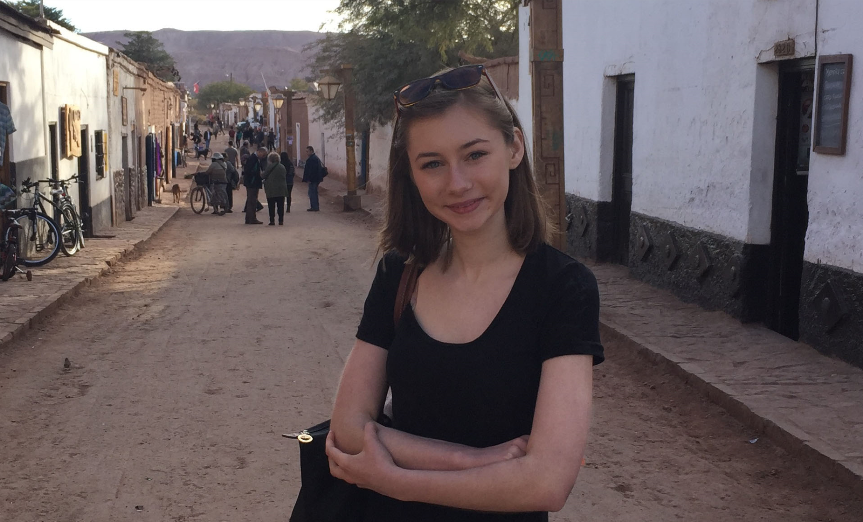 Yours truly in the rustic town of San Pedro de Atacama

In June 2015, my dad and I took a trip to Chile that was centered on astronomy. We toured three famous professional observatories and took wide-angle photos of the beautiful southern Milky Way.  Neither of us had ever been south of the Equator, so we had never seen any of the celestial sights in the southern sky that are only visible from that part of the world. We also toured much of northern Chile, which is a gorgeous country with very friendly people.  We visited Santiago, Antofagasta, Valparaiso, Vicuña, La Serena, Calama, and San Pedro de Atacama, and we took a side trip to Easter Island (Rapa Nui).  It was a trip of a lifetime!

During our visit, we made a day trip to the Chaxa Lagoon, which is located on the edge of a rugged salt flat and is home to pink flamingos. 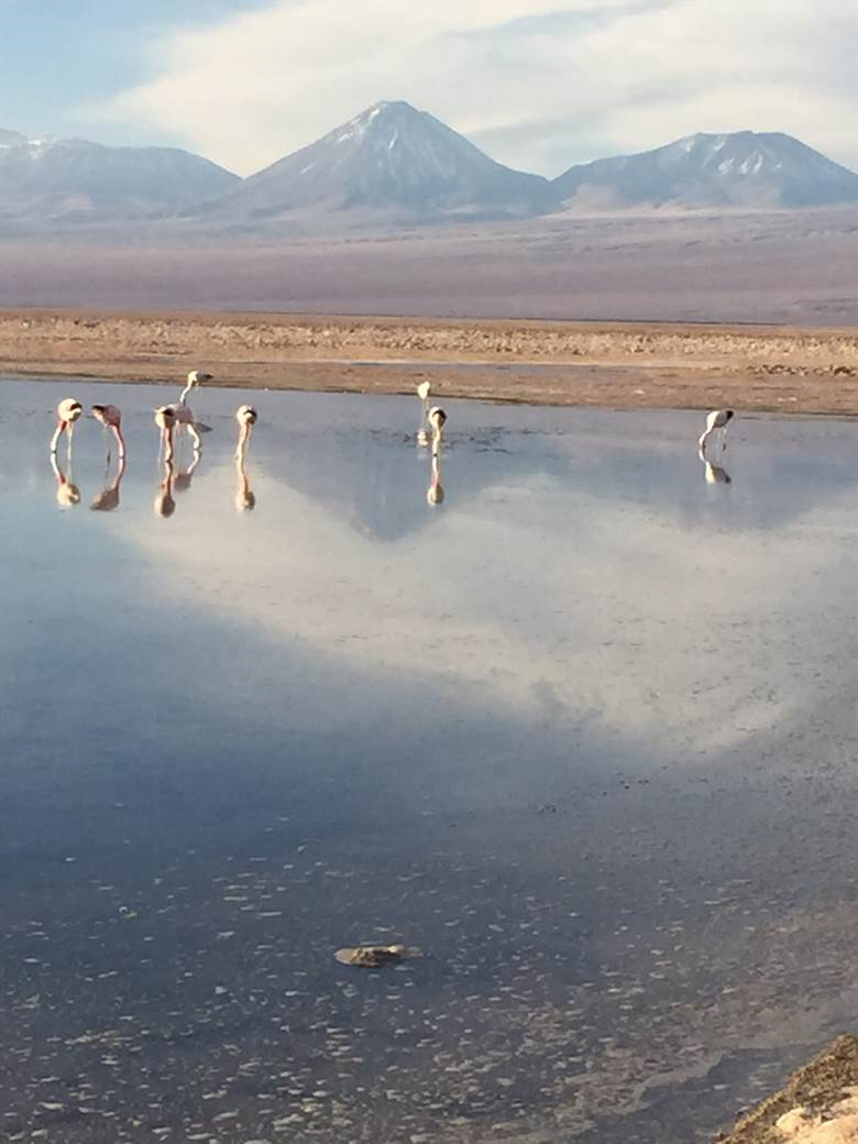 Flamingos at Chaxa Lagoon, with Licancabur Volcano in the background.

San Pedro was also home base for our amazing trip to the ALMA radio telescope array, which I discuss in detail here.

The Night Sky from the Atacama Desert

For me, the most spectacular aspect of San Pedro was the magnificent night sky. On our first night in San Pedro, our group traveled by bus to a dark sky site in a blue zone operated by Alain Maury. Alain’s company is named San Pedro de Atacama Celestial Explorations (“SPACE”), and his website can be found here:

Alain has a dozen telescopes set up on piers on a network of concrete paths on his property, with designs ranging from Dobsonians to equatorially mounted Schmidt-Cassegrains, Newtonians, and refractors. He gave an interesting talk on objects visible in the southern sky, as well as a laser-guided tour of the southern Milky Way. His wife was kind enough to serve blankets and hot chocolate to our group as the temperatures dropped into the thirties.

Eager to capture wide-angle shots of the southern Milky Way, my dad and I set up our gear several yards from the main group. It was so dark that we could not see our equipment or each other’s faces without help from the red penlight flashlights we had brought. We began our imaging session with our Oculus All Sky Camera from Starlight Xpress, which we mounted on a standard camera tripod. Here’s the black and white image we captured with the Oculus: 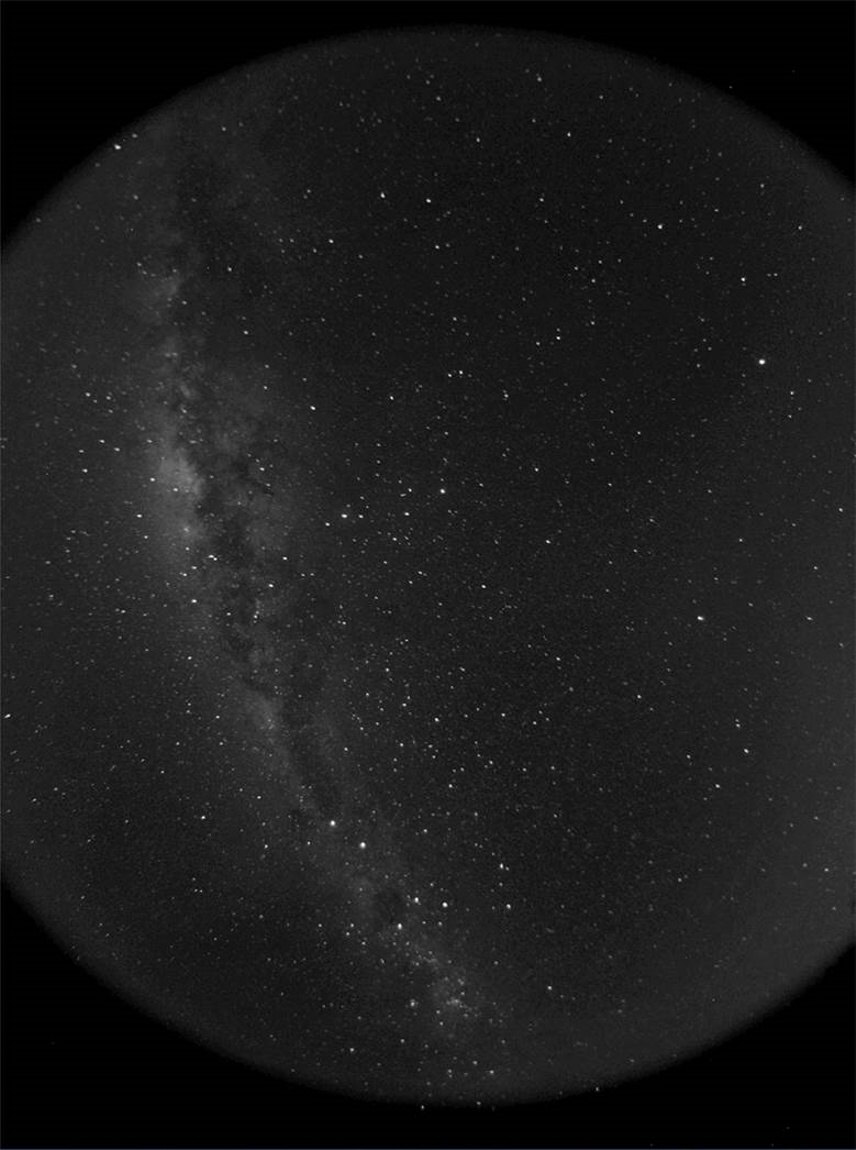 Next, we set our Canon 6D DSLR up on an iOptron Sky Tracker mounted on the same standard camera tripod. This is the same setup we had used two years earlier to capture wide-angle images of the northern Milky Way from Natural Bridges National Monument in Utah. We thought we were having great success, but reality set in around 2 a.m., after we had already returned to the hotel, when we found, to our dismay, that the storage card on our camera was full, and the dozen or so photos we had taken with the Canon 6D had not been stored. All our efforts with the Canon 6D that night had been for nothing! Worse yet, the weather forecast called for clouds the next several nights. It looked as though one of the main goals of our Chile trip – capturing wide-angle photos of the Milky Way – was in serious jeopardy.

Next: Our Second Night Out in the Atacama